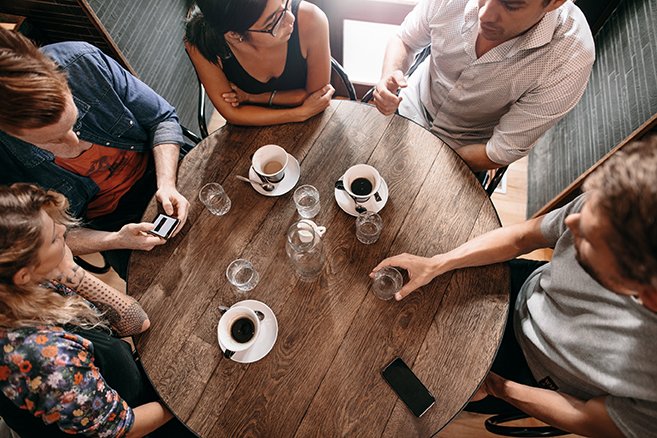 High up in a room overlooking Paddington Basin, with hot coffee and Jammie Dodgers to hand, the doors opened yesterday on my first Frazzle Café, admitting 30 or so men and women who ranged from feeling frazzled (not just stressed but thinking about stress) to experiencing mental health concerns to having someone in the family or a friend or co-worker affected by depression and anxiety and simply not knowing what to do. Until now – none of them had anywhere they could just turn up and find some anonymous peer-to-peer support.

We live in a time where to have a life crammed to the hilt is considered a success story. But with all this pressure, so many of us have no-where to go to meet and talk about it.

So yesterday, it was remarkable to watch as one after another of these people bravely come forward to share their stories. Just calmly, sitting in a circle in the café, stating their case, and feeling validated as a result. Feeling heard to me has always been half the cure.

It was everything I had hoped for and more when I came up with the idea for Frazzle cafes five years ago. Of fulfilling my dream to start walk-ins where people have a chance to talk honestly without feeling stigmatised self-indulgent or weak.

The idea came from my Sane New World Tour, which I began after gaining a Masters’ degree in cognitive behavioural therapy and mindfulness from Oxford in 2011, and writing a book of the same name. The second half of the show I asked the audience if they wanted to speak and they always did.

I performed for 200 shows in theatres of 700-800 capacity – and in the second half I offered the audience the chance to speak, and fond I couldn’t shut them up. Moreover, once a week when I was in the West End, I opened the theatre to the public for free walk in sessions with great speakers and therapists which the audience could make contact with.

Honestly, the show was funny, but I think they would have come without any jokes.  They were instinctively reaching out and networking with each other, often turning up to several shows and events and meeting again.

I could feel and see a real need for some kind of space where anyone with a mental health concern could connect with this peer-to -peer support. In my head, it was looking more and more like a sort of AA to help us get through the overwhelming stresses of modern life.

This isn’t just for the one in four Britons who will suffer a mental illness at some point in their lives, or who are family to someone who does, or who work in mental healthcare. But for the ‘four in four’ – who feel they are cracking from the pressure cooker of life. Too exhausted keeping up the front of being fine – and feeling frustrated with that.

Because who isn’t in a state of stress overload these days? Stress upon stress, and thinking about stress on top of that. So, as I was also writing my mindfulness book called Frazzled, the name for the cafes was pretty self-evident. It is also so much easier to say I feel frazzled, than to say I feel depressed, or anxious, or mentally ill, all of which are still such stigmatised things.

Ending the taboo around mental health is all important. Because right now, if you do feel your mental health isn’t great, you may worry about telling your employers or friends, especially if you are saying I need to go for therapy for an hour.  You may fear getting judged and sometimes with good reason – according to Mind on in five of those who have taken their employer into their confidence about their problems with mental health is soon fired or pushed out of their jobs.

But, trust me, if you can’t ever get to a place where you can express yourself to others, well, that way madness really does lie. Everyone – however stiff their upper lip happens to be – gets what you mean if you say I feel frazzled and I need a break.

I see the benefit of these Frazzle cafes is that whenever we’re all a little bit more open about mental health that lessens the overall prejudice.

That was true yesterday as we opened the doors at the Frazzle café in Paddington – where the two sessions we held were a pilot scheme. Strangers who had applied via a mailing list, compiled from audiences who came to my shows, opened up about themselves quite quickly, responding to the warm, positive and safe atmosphere. This common thread of feeling isolated can be pretty powerful in uniting people. That experience of meeting face to face is important and with our mental health services stretched to breaking point and it can be hard to see a therapist on the NHS. Many people simply don’t believe they can go to talk, to get affordable help.

Meanwhile, everyone else – the frazzled at large – are often separated from family and the old connections of church, we’re emotionally blocked off and in real danger of stress wiping us out.

My hope is that these cafes, if they take off, will be one solution.  It’s still early days – we need to work out branding, marketing and organisation details, but Marks & Spencer has already generously offered places to host meetings. They’re suggesting quiet rooms with coffee on a trolley, by the way, not the middle of a crowded café on the shop floor, which would feel a little exposed, let’s be honest.

Each meeting will be led by a facilitator, to ignite conversation, there’ll be a loose order – a little mindfulness to start and end the meeting, a coffee break in the middle. And there’ll be someone who works in the mental health field always present for support, and lots of contact details for support groups to hand.

I hope people to leave feeling they are part of something bigger than themselves.

Certainly, yesterday’s clientele was enthusiastic, with many talking about how they wanted to want to help set up cafes close to their homes, in schools and at the office. At first, I imagine each group will feel fairly random in terms of what elements of health are discussed, but I can envisage more niche groups getting established, like teens taking exams, or families where depression is present.  Thirty feels the right size for now – it is possible to sit back a little in a group that size if you are worried about feeling exposed. But smaller groups might naturally emerge. I can see buddy systems developing too.

In 200 shows with 700 people in the audience each time, we’ve never had an awkward or uncomfortable incident so far. People really listened to each other because they recognised their own tribe and only want to give support.

This is my chance to give back. And yesterday’s meeting turned out just as I thought it would. When I led the mindfulness session at the end, I could feel we’d let the heat out of the pressure cooker for some. Because, while there may not be a single solution to the stress of modern life, to be able to look each other in the eye and say, yes, I know how you feel and its OK is at least a start.